2020 is here, and with it comes the first dual wield plugin extension of the new year!

Monkeygrip is the ability for an actor to wield a weapon normally used in two hands, in only one hand. This is an  extension to my Dual Wield plugin. Naturally, you'll need that plugin for this one to do anything.

Odds are, if you're reading this, you're at least aware already of what my dual wield plugin does, as it is one of my most popular downloads, but just in case, a brief overview of what that plugin can do:

This plugin is an extension to that last bullet point. Normally two handed weapons can only be wielded with a light shield, which is to say, an item that is etypeId 2 (shields) that is also tagged as <offhand>.  This is to allow shields like bucklers, or items that go in the shield slot but aren't shields to continue to be wielded by someone using a two handed weapon. This is common in a lot of RPGs, as well as tabletop games.

Using this plugin, actors can be given a trait that allows them to wield a two handed weapon as if it were one-handed. While the majority of the ramifications of this fall onto dual wield type actors specifically, there is one case where a non dual wield actor can still see a change on this as well.

Actors who aren't dual wield type can still use two-handed weapons. This plugin allows them to sacrifice the damage bonus of using a two-handed weapon in both hands, for the defensive gain of using a heavier shield in their offhand than would normally be allowed.

Dual wield type actors gain much more benefit. In addition to the above point, which also applies to them (if they can use heavy shields), dual wield actors can use a generally heavier weapon in one hand.

This extension interfaces with damage modifiers from the base dual wield plugin in a very specific way, and it's worth noting here:

The ability to monkeygrip a weapon in the offhand is configurable from the plugin parameters. Dual wielding monkeygripped weapons is sometimes called 'Titan's Grip', a name given to the ability of warriors in World of Warcraft. There is no real distinction made with this plugin between monkeygripping both weapons, or just one.

An actor who is capable of monkeygripping does so automatically under the following circumstances:

Actors who are capable of monkeygripping will also only use their weapon in two-hands in the following situations:

Additionally, if the player attempts to monkeygrip a weapon in the offhand slot, while the main hand weapon slot is empty, the weapon will simply be unequipped. Monkeygripping is not possible with the other hand being a bare hand,  and a two-handed weapon can never be wielded in the offhand slot unless it is being monkeygripped.

This plugin extends the functionality of the switchable two-handed weapons extension as well. If offhand monkeygripping is enabled, players will be able to switch the weapons in their offhand between one and two-handed mode. Note that if the mainhand weapon slot is empty, and the player swaps an offhand weapon to two-handed mode, it will be unequipped.

How to use it:

Import this plugin into your plugin manager, and place it below the Dualwield Menu extension. This plugin makes some changes to how parameters are drawn on the menu scenes modified by the menu extension, so it will look a bit screwy if you don't load it after.

The note tag <Monkeygrip> can be added to armor, states, classes, and actors. If an actor has any source of the <monkeygrip> tag on him, he is considered monkey grip capable. From there, if any of the above conditions are met, he will wield two-handed weapons in one hand. Note that putting the tag in a passive state, and putting that passive state on a weapon is not recommended, as the dual wield attack sequence temporarily unequips weapons, which is likely to cause your monkeygripped weapon to be unequipped permanently, as your actor won't be monkeygrip capable when the weapon is removed.

I have some screenshots to show off how it looks in game.

In order to download this extension you must purchase it at or above the minimum price of $3.99 USD. You will get access to the following files: 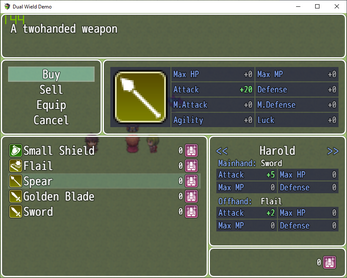 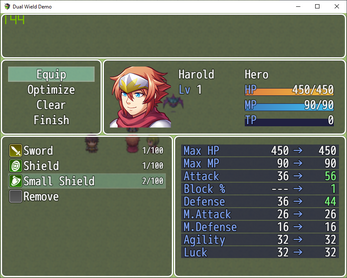 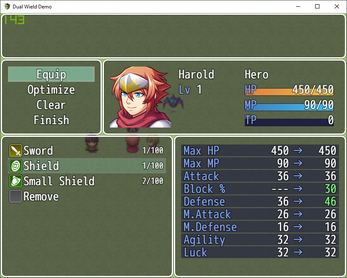 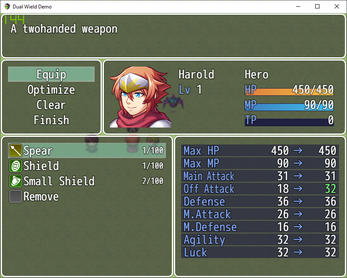