Hello, I'm trying to add an increase to Parry chance to armor based on this comment:

Using the additional parry chance, you could modify parry rate based on any of the following:

I'm not exactly sure how to get this to work though. As a previous user mentioned 2 years ago there aren't any Notetags for +Parry for armor, so I assume this was a workaround added later?

That comment was referring to the Additional Parry Chance plugin parameter.

That parameter is just a big notebox which is parsed into the game as a function. The default value in that box is just a flat parry rate increase based on the battler's atk parameter, but you can change it to be just about anything.

The snippet of text there is referring to something you could do with it, knowing that it can access anything on the battler. That effect isn't very easy to implement via the notebox, though because it is checked on every battler (who can parry) every time a parriable attack is used on them. While you could use that notebox to set up a series of checks (if a.isActor() && a.equips()[3] === ... etc), it would be pretty inefficient, especially if you have multiple equips that can do that.

The much easier way to do it is to add parry rate to states, and then put the states on the armor passively using the YEP_AutoPassiveStates plugin. Perhaps using a different state for each equipment slot so you don't run into weird stacking issues.

Greetings! I've been having a great time with your plugins, in my opinion many of them are practically essential. Thank you for existing. I have a suggestion, if you'd have it.

Parry Chance notetags seems like they can't be placed on armors which, of course, makes sense in practicality. But I think it could add some depth for players if you could boost that stat with armor types. For example, something like a "Fencer's Ring" that could add a flat amount of parry chance. I suppose it could be done by giving the equipment a passive state that boosts parry chance, but then I don't think it would be stackable if you have 2 of the rings on, or similar armors without bloating up the state database.

Also Block Chance/Percent/Value notetags for weapons for similar reasons. Being able to boost blocking potential through weapon equips could have some pretty great synergy. Perhaps something like "Gladiator's Sword".

Thanks for your time and these awesome plugins :)

Those are good suggestions. I'll see about adding them in future updates.

That would be fantastic :D 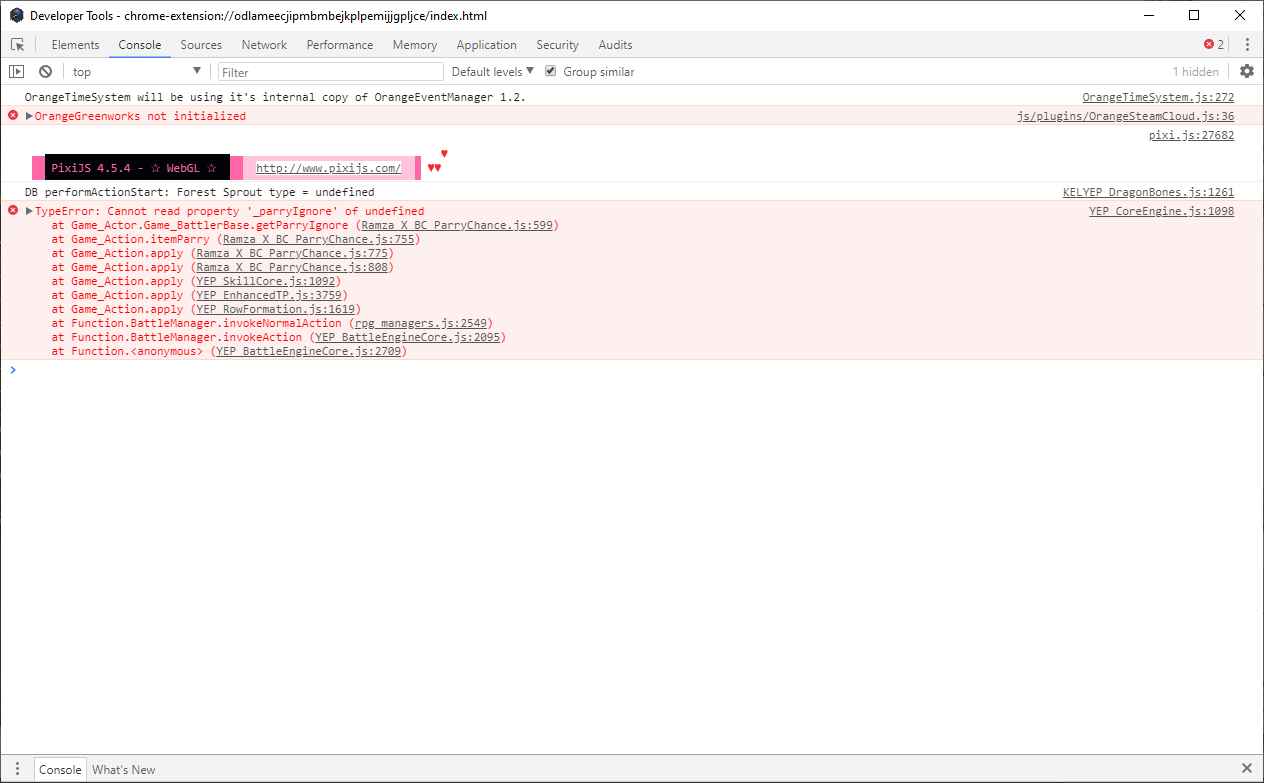 If using Yanfly Item Durability, The Parry plugin will crash if player attacks with a weapon with 0 durability.

I'll see if I can correct this problem when I get home later.

It shows a barehanded attack which works fine, then it shows a sword on the second dual attack and black screens.

I have uploaded version 1.07 of this plugin which corrects this issue you have reported.

You can see the update devlog here.

Thanks for the report.

Hmmm, I dig the parry, but is there any way to factor in parameters from the opposing side to balance down parry chances?  As it stands, as far as I can tell with the default formula + base parry, by a.atk 435 you're at a 100% chance to Parry, basically.

Can work around this by not having a scaling bonus formula, but I'd ideally like to have a little bit of give / take with scaling, especially if enemy battlers are going to have a chance to parry player attacks too.

I had not included comparisons to the params of the incoming attacker when I made this.

This is a good suggestion, so I will include it in a future update.

I will also add a new offensive parameter, similar to shield piercing that will reduce the targets effective parry chance, as that seems like a wise addition as well.

I'm pretty excited about the possibilities--I was stoked when I saw this plugin available, as one of the core party members for my current project is framed as a duelist and intended to be a very 'mechanical' sort of character, juggling various stances and the like.

Having the ability to wrangle parrying and triggering actions into ripostes and the like has great potential for fun and interesting mechanics--and I similarly like the idea of being able to have enemy battlers or even bosses who utilize parrying in compelling ways too.

As it stands I just worry for managing scaling without ending up in a situation where the player is left frustrated because enemies are frequently parrying with no recourse on their part--but I don't want to write off enemies being able to parry altogether.  Thanks again for the consideration!

I have just posted an update to this plugin that adds in a couple of ways to mitigate balance problems resulting from scaling.

Expertise is an xparam-like trait that subtracts from a targets parry rate during an attack. It can be added to classes, states, weapons, armor, and enemies via note tags. Multiple sources of this trait stack additively. Every 1% of expertise reduces the chance for your attack to be parried by 1%. This xparam can also be shown on the YEP_StatusMenuCore screen using the short code 'xpt' via the exparamfix plugin, or the dual wield's menu extension.

I also added Pierce Parry, which is an effect that can be put onto weapons, states, or enemies, and reduces the targets parry rate by a % of their total. This effect is calculated after expertise has been applied. If there are multiple sources of this trait, only the one with the highest magnitude is used.  This trait can also be negative, causing the targets effective parry chance to increase by a %. Actors who are dual wielding weapons with this trait will only get the value from the weapon currently being swung, allowing specific weapons to break parries more easily.

Remarkably swift!  Expertise and Pierce Parry are both great--I was actually just experimenting with setting up flails and Pierce Shield so that they're harder to block, so having a source of parry piercing as well is fantastic!

My only remaining wishlist element then is not having an avenue for a scaling expertise formula, simply for concern over how to balance expertise against scaling enemy parry chance.  I'm going to need to do some brainstorming over how to best present expertise equipment / skills / actor perks to players in a fashion they can appreciate defeating enemies with high parry (or really, a way to visually ID parry-happy enemies in general.)   Maybe a state icon, or a 'parry aura' effect as visual shorthand.  Hmm.

I realize this is ultimately a sliding scale issue to begin with though, since it will be difficult for a player in an RPG Maker game to really get a transparent understanding of their odds / the 'why' of how these calculations occur in a given battle.  That stems from the broader boundary of RPG Maker MV's UI limitations in general though--my kingdom for the ability to mouseover a UI element and get a tooltip with information for the player!

Though writing that, I'm prompted with the notion of potentially having an optional animation for expertise making the difference for an otherwise parried hit (I imagine that is not actually viable, with expertise reducing parry rate instead of being its own calculation--but it's a fun mental image for one battler to do a parry 'clash' animation, only for the attacker to do their own expertise 'clash' animation to 'overrule' it.)

Much oblige for your efforts, stellar materials!